Red Sonja is a 1985 Dutch-American epic sword and sorcery film directed by Richard Fleischer and written by Clive Exton and George MacDonald Fraser. It is based on the character of the same name, created by Roy Thomas and Barry Windsor-Smith.

The fearless warrior Red Sonja sets out to rid her kingdom from the tyrannical rule of evil Queen Gedren.

Queen Gedren sends her soldiers to murder Sonja's family after Sonja turned town her sexual advances. Her soldiers rape and assault Sonja, leaving her with nothing. Sonja yearns and cries for revenge, only to be answered by Scáthach, the red goddess. Scáthach makes her stronger, more agile, and gives her heightened fighting skills in exchange for the promise that she will never sleep with a man unless he defeats her in fair combat. Sonja agrees to the terms and starts to train with The Grand Master, a skilled sword master who mentors her.

Meanwhile, Varna, Sonja's sister, who is a member of an order of priestesses, is at a temple nearby. Along with the other priestesses, she prepares to banish a mystical light-powered relic, The Talisman, which created the world and all living things. The Talisman is very powerful and difficult to control. Only women can use it; when men try to touch it they vanish. Queen Gedren is aware of the Talisman's power and when she finds out that the priestesses plan to banish the relic, she sends her soldiers to slaughter the priestesses.

Varna sees her fellow priestesses getting murdered and witnesses Queen Gedren steal the Talisman herself. Gedren sends the priestesses who survived the attack into the vault, which originally held the Talisman. Varna gets mortally wounded and is near death when the Lord of Hyrkania, Lord Kalidor, finds her and runs to find Sonja to bring her to her sister. Sonja arrives just in time to see Varna, who urges her to find the Talisman and banish it into darkness because it ruins the world. Sonja agrees and Kalidor offers to accompany Sonja on the quest, but she rejects his offer.

Sonja goes to Hablock, which is now in ruins, and meets Prince Tarn and his servant, Falkon. They explain that Queen Gedren destroyed Hablock with the Talisman after Prince Tarn refused to surrender the kingdom to her. He announces his plans to crush Gedren, who is now based in Berkubane, the land of Perpetual Night. Prince Tarn asks Sonja if she would like to come work for him as a cook, but she politely declines and continues on her quest.

Sonja arrives at the mountain gate and is confronted by Lord Brytag who asks her to pay him a "tender tribute". She refuses and kills him, taking his key to the gate so that she can enter. His troops come and surround her, but she is saved by Lord Kalidor, who had been secretly following her the entire time. Kalidor attacks the troops, allowing Sonja to escape and continue on.

Sonja runs into Price Tarn yet again, but she finds him tortured and imprisoned by a group of bandits. Sonja kills the bandits and frees Prince Tarn. Sonja, Falkon, and Prince Tarn all decide to continue on the quest together and they head off towards Berkubane. Queen Gedren's wizard uses a large magic dish to show Sonja, Falkon, and Prince Tarn approaching Berkubane. Gedren orders that Sonja be taken to her, unharmed. Gedren then uses the Talisman to start a storm, forcing Sonja and her group to hide in a cavern in Ictyan.

There, Gedran's "killing machine", a mechanical beast, is released to attack the group. Kalidor appears yet again to save the group from the beast, allowing them to escape. Sonja allows Kalidor to join their group upon learning that he is actually a descendent of the lords who entrusted the Talisman to the priestess temple. He tries to flirt with Sonja, but she tells him that no man can have her unless he can defeat her in a sword fight. Kalidor accepts the challenge and fights her to a draw.

The group finally arrives at Castle Berkubane. They split up - Kalidor, Falkon, and Sonja enter the castle, whereas Prince Tarn stays behind to guard the front entrance. Sonja finds Queen Gedren in her council chamber to confront her. Kalidor and Falkon go to the dining hall to fight the Queen's guards. Tarn catches Ikol, Queen Gedren's aide-de-camp, escaping the castle with bags of Hablock's gold. Tarn crushes him to death with the front door.

Queen Gedren knows that she cannot defeat Sonja in combat so she races to get The Talisman. The Talisman causes the floor to split open. Molten lava beneath the castle starts to rise up. Sonja fights Gedren and plunges her sword into the Queen. Sonja then throws the Queen into the molten lava below. Sonja grabs the Talisman and also throws it into the lava to destroy it. When the Talisman hits the lava, its power starts to tear Castle Berkubane apart. Sonja and her group run to escape the castle and they get away just in time.

Prince Tarn and Falkon decide to go back to Hablock to rebuild their kingdom. Sonja and Kalidor have another sword fight and end up kissing.

Marvel Comics adapted the film into a two-issue comic series with the story title "Into the Realm of Darkness!", though this miniseries is typically known simply as Red Sonja: The Movie. The comics were written by Louise Simonson with art by Mary Wilshire and Vince Colletta. The two issues were published in November and December 1985, and collected together in Marvel Super Special #38, also published in November 1985. 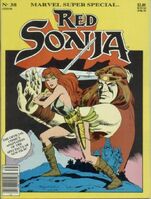 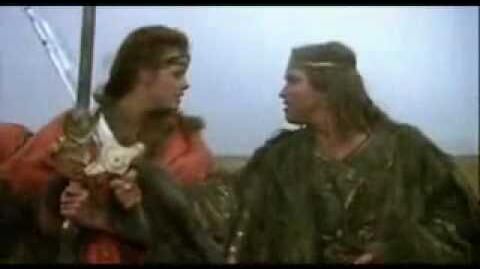 Retrieved from "https://redsonja.fandom.com/wiki/Red_Sonja_(1985_film)?oldid=2046"
Community content is available under CC-BY-SA unless otherwise noted.